In a unanimous vote, the Pomona City Council approved the Active Transportation Plan this past Monday, March 3rd.  This plan show that the City is now committed to creating safer streets for cyclists, pedestrians and even drivers in the City of Pomona. With the plan adopted, the City is now a viable candidate to apply for grants to build bike lanes, create bicycle education programs, push for Safe Routes to School programs and improve street infrastructure- just to make a to name a few proposed programs in the plan. 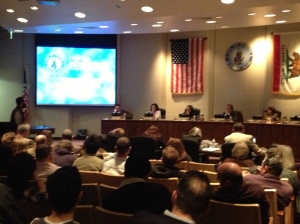 At Monday’s council meeting, bicyclists filled the council chambers forcing the ATP to be moved first on the General Plan update list. For almost an hour, cyclists and like-minded individuals spoke out and supported the plan. Residents who have never spoken in front of a council before, practiced their civic duty and told the council how they want the ATP. Over 3o people spoke in support of the plan one of them a Pomona  princess candidate who changed from a tiara to a bike helmet, and a father and his young daughter who insisted to speak in front of the council demanding safer streets for her family. 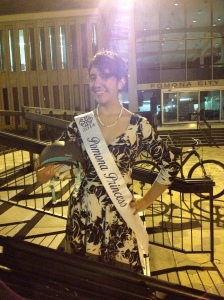 The ATP is a step in the right direction for Pomona as it can help the Pomona Valley reach AB32 and SB375 goals of reducing green house gases and creating sustainable solutions. It also demonstrates that the City is committed to creating safer streets for cyclists in the area.

We are proud and happy  and proud to work with a community of passionate cyclists. As always, the Pomona Valley Bicycle Coalition strives to create safe streets for all and  we look forward to working with the City in creating a safer and healthier Pomona. You can read more about the meeting at LA Streetsblog and the Daily Bulletin.